03.28.2018
In the framework of fiscal 2017, the opportunity to bring objective results for this period and to build a forecast for the next fiscal year 2018. During the full action of the Law, i.e. from the moment of the final formation of all Executive organs necessary for its functioning (Secretariat, the Supervisory Board, the Arbitration Committee, the Arbitrators), it took a full 10 months. Successfully restructured (or is in the process of) 10 large cases, totaling more than 13 billion UAH. These figures, though, and should be seen as the only main criterion of the efficiency of the Law "On financial restructuring" (hereinafter the Law). However, given the fact that the report of the NBU at the end of 2017 the total NPL in Ukraine has reached a historic high of 58% (49% PrivatBank). The size of non-performing loans in the corporate sector in October 2017 is 430,4 bln. (62% of the corporate loan portfolio) according to the NBU. That is 10 months of work, the Law was restructured 4.2% of the total portfolio of problem loans, the NPL rate in 2017 showed a record growth. Based on the totality of all these figures it becomes clear that the Act has not received a mass demand and even failed to significantly reduce the NPL in the corporate sector. 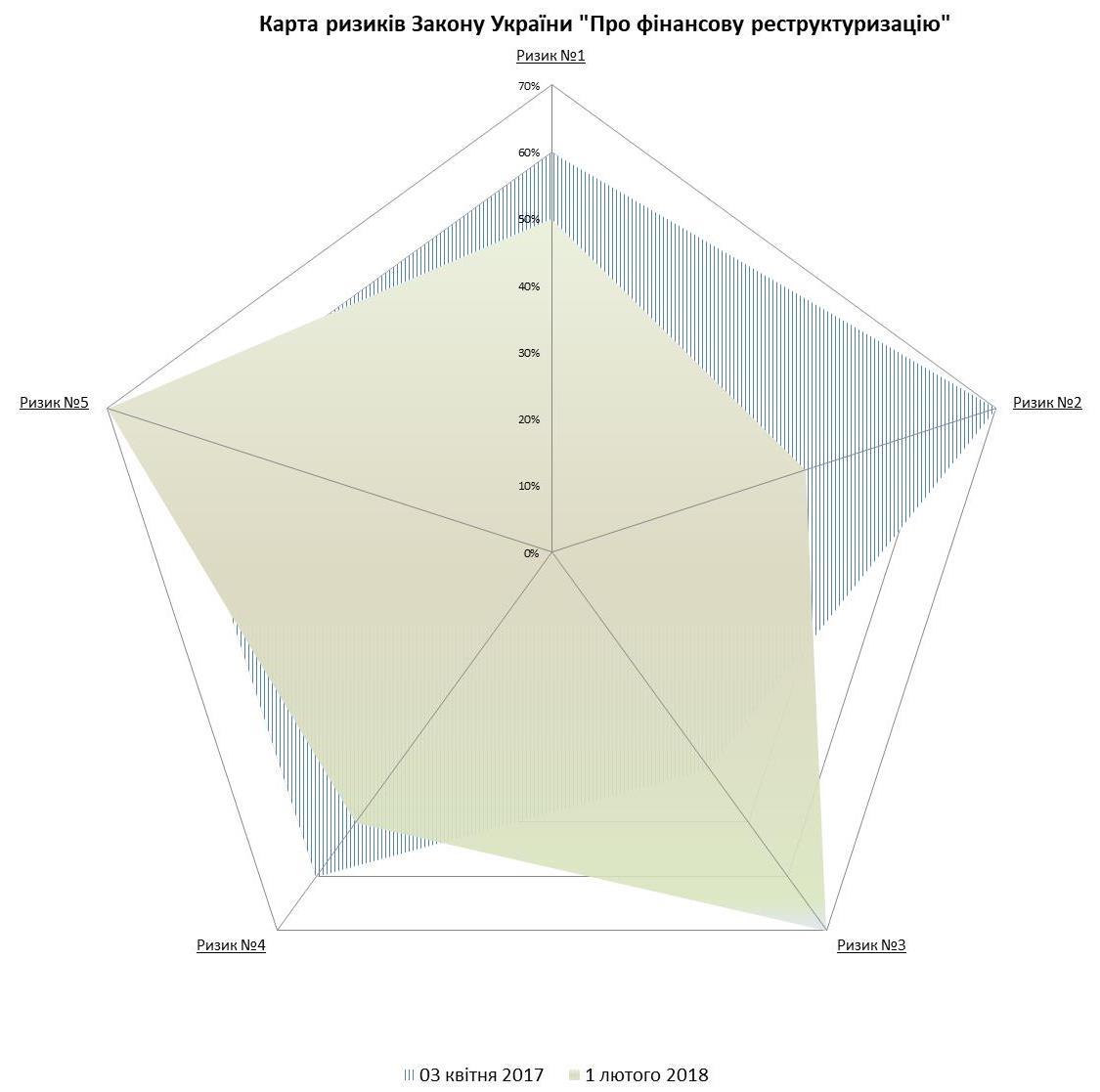 How the factors contributed to this slow development of the Law, we will understand more details.

Risk No. 1 risk lack of demand for the product by creditors and debtors;

This type of risk lies in the responsibility of the Executive bodies established for the implementation of the Law, including the Secretariat. Over the past year, the Secretariat had carried out a full 9 events (conferences, round tables) with participation of representatives of banks, businesses and government agencies. Sent 200 letters, 5 published analytical articles, created 8 queries for changing the current Legislation. As a result of the actions we have reduced this type of risk and has achieved a certain success in this direction.

Risk No. 2 - risk technical and operational obstacles to the full functioning of the Law;

Analyzing the timecode of the project entitled "Financial restructuring in Ukraine", you will notice that even the adoption of this Law (June 14, 2016) are already late by almost 2-3 years. Besides, de facto, the Law generally earned from April 3, 2017, which further widened the gap between the immediate need for such legislation and its actual implementation. However, during this long preparatory period was considerable work was carried out. And in the process, in the form in which it is now almost offset by any technical or administrative obstacles to the participants. Even all key to the operation of Law form and document templates have been specially designed only recommendatory vein, which should facilitate the workflow process in the procedure, but did not lead to new barriers between participants. Therefore, this type of risk is gradually reduced to a minimum, and shows a positive from the point of view of Ukraine dynamics.

Risk No. 3 - Administrative risk. The lack of support or opposition from regulators and Executive authorities;

Unfortunately, this type of risk increased significantly during the actual existence of the Law. Even a formal "parents" of the Law, namely the National regulator, has suddenly changed the opinion and began to arise suggestions about a complete change of course and adoption of new Legislation to transform bad debts. For example, our Law, we see a system a crisis of confidence in the administrative apparatus in the country. The lack of compliance with basic state-forming principles, at least short-term planning and compliance with the specified rate, in any case, in the short term. The question arises what kind of investment climate we can talk, when the same public authority, which yesterday supported the Law, for one year without any open public objective reasons to change his mind. The inertia of the promotion Law, which must first unfold among the state banks, completely independent from the NBU. And instead to promote the interest of the state banks in the procedure, which is in the competence of the regulator, we have full passive and even negative information background around the Law. That is why, in our opinion, this is one of the main negative factors for the procedure in Ukraine. At least so far, the NBU will not form a kind of uniform and constant opinion on the matter, I hope, will be held in the near future.

Risk No. 4 : the Legal risks of the parties that decided to act in the procedure of financial restructuring;

To curb the legal risks of the parties to the procedure were also carried out certain work. Although we never came to a real understanding of the changes in the Law, primarily for reasons of absence of real prospects for such changes, despite their content, due to the large workload of our legislature. But there have been a number of official pronouncements by state authorities, particularly in the field of taxation that helped to predict the result of the procedure for each of the parties. So, fortunately, in the intervening period, this risk is slowly but were reduced.

Risk No. 5 - the Macroeconomic risks;

This figure is the most objective among those that affect the lifecycle of the Law. And unfortunately, the macroeconomic factors in Ukraine in recent years carries only a negative trend. At all desire it is difficult not to consider these facts, especially since the procedure is designed for companies that believe in the future success and out of its own financial crisis, which is impossible without the appropriate economic environment in the country as a whole.

May come to understand that the objective of a viable procedure, which has its client in the market is still constrained due to, as the inertia of the same market, and the unexpected resistance within the country. However, given the fact that practical and systematic work procedures of financial restructuring being actively conducted such major players as OJSC "State savings Bank of Ukraine", OJSC "Alfa-Bank" and other banks, the process can not be stopped. Thus it is proved that the positive effect of the Law may not only theoretical but also quite practical. Come even market signals and administrative sector of Ukraine, about the need to give banking and business community more time to dive into the new in essence, the Law "On financial restructuring" and to extend the Law for another term. We can only support such an initiative, of course while maintaining the existing demand for the procedure.

So to summarize, this analysis only dry numbers. The procedure has been 10 months, were 6 financial institutions in Ukraine, has restructured loans worth more than 13 billion UAH.

Link to article on pravo.ua

The project is funded by a grant received from the European Bank for Reconstruction and Development under the Shareholder Special Fund.
The project is implemented by the administrative and financial support of NABU.